This Spotcap review will help you  make the right decision and understand who Spotcap are –  we delve into the background and ownership of Spotcap, what their clients think of Spotcap  and how they differentiate themselves from their competition. We also run through what Spotcap look for in a prospective borrower. Read the following Spotcap review to find out more.

Spotcap is a very respected  company. You can borrow anywhere from $10,000 to $500,000 for any period of 1 months to 24 months, that you can draw down at your own accord. Great website, great reputation and highly praising client reviews.

The website is  smooth and aside from the extensive application requirements the online application is easy. We conclude that it is one of the best lenders in Australia. Businesses’ with over $200,000 annual turnover are generally happily accepted.

Table of Contents for this SpotCap  Review

Below you can read the results of the research we have made about Spotcap. We try to keep our data comprehensive and up to date, and if we made any error please let us know.

What Finance Options Do Spotcap Offer?

Spotcap offers an unsecured line of credit up to $500,000 which gives clients the flexibility to draw down once daily up to the maximum size of their facility. Each time a customer draws down, that amount is then considered a loan. It’s reported that Spotcap usually offer a line of credit facility roughly equivalent to your business’ monthly turnover. 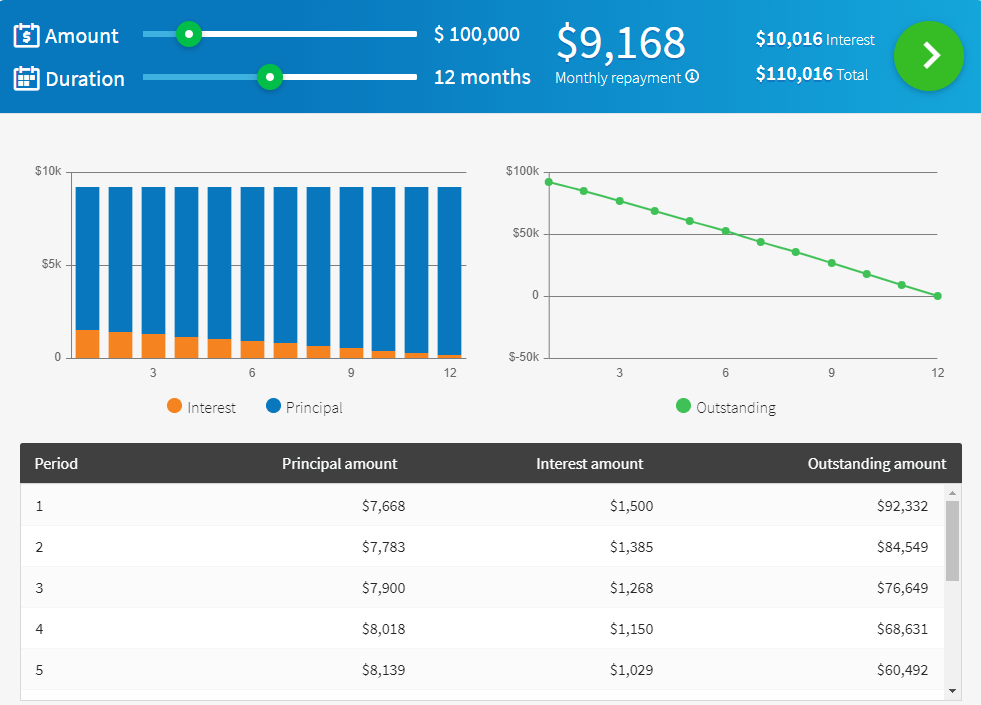 There is a 2-3% origination fee which is calculated based on the size of your line of credit, but there are no ongoing management fees or early repayment fees, customers can drawdown and repay according to their cash flow demands but will have a minimum monthly amount to repay.

Spotcap is an innovative online lender for small and medium-sized businesses. The company was founded in 2014 by entrepreneurs Jens Wolosczak and Toby Triebel in partnership with Rocket Internet.

The company is currently led by founder and CEO Dr Jens Woloszczak and Managing Director Simon Keast. Headquartered in Berlin, Spotcap  operates in Spain, the Netherlands, the UK, Australia, and most recently, New Zealand.

As of October  2019, Spotcap employs over 130  people and is headquartered in Berlin, Germany.

Spotcap operates as a direct lender to small and medium-sized enterprises (SMEs) in the United Kingdom, the Netherlands, Spain, Australia and New Zealand where the company offers businesses access to flexible finance.

In Spotcap’s most recent press release (September 2018) , Spotcap had issued over €250 million in credit lines to SMEs and works with more than 10,000 intermediaries in its distribution network. The  CEO Jens Woloszczak has said that 60% of Spotcap’s loan book can be attributed to its 5000 strong global partner network.

To take just some of the numerous positive feedback outlined:

“Given the state of Business Banking in Australia at this time; Spotcap Australia is a breath of fresh air; from a customer service and business efficiency, point of view”

The negative feedback appears to relate to one customer who was presented with confusing information regarding their interest rate in a monthly format as opposed to annual and one that did not receive a lending decision within 24 hours, although Spotcap did respond within the 24 hour timeframe requesting for more information in order to make a decision.

Spotcap is still fairly new to the lending market, but their reviews are generally positive. The small number of negative reviews that exist online address their strict application requirements (and the fact that they take careful stock of your negative financials). It’s positive to see their customer care team respond to each bad review and encourage communication in order to resolve the issue if not for that particular client but for future clients.

The positive reviews state that the lending and application process are both easy, that customer service is excellent, and that they are a professional and efficient company to work with.

Spotcap’s online application is straightforward and can be completed in as little as five minutes, either online or in collaboration with a financial advisor, broker or accountant.

The company claims to operate a “full-service lending platform” and works with leading institutions to provide their SME clients with an efficient and straightforward lending experience. And although they have a fairly stringent set of application requirements they do ease this by allowing customers to connect their business bank account for one-time read only access with Spotcap’ systems rather than manually pulling previous bank statements and sending them yourself.

Spotcap is a strong lender with great reviews which is mostly aimed at established businesses with sales of more than $200,000 a year. It requires more information than other lenders to provide a loan, but it’s speedy in making decisions and has a proven track record of providing finance to businesses from a variety of different sectors.

Submit an Expedited Application to Spotcap through Become using the link below.

In 2018, Spotcap partnered with BAWAG Group, a significant Austrian bank.

BAWAG Group AG is the listed holding company of BAWAG P.S.K., which is headquartered in Vienna, Austria, with the main banking subsidiaries easybank and start:bausparkasse in Austria and Südwestbank in Germany. With more than 2.5 million customers, BAWAG P.S.K. is one of Austria’s largest banks operating under a well-recognised national brand.

The two companies said that their market-leading strategic partnership would give Austrian SMEs access to same-day financing and capital lines that could help businesses obtain capital that’s crucial for growth and expansion.

BAWAG P.S.K.’s new lending service will be powered by Spotcap and its cutting-edge platform, allowing the bank to offer a fully digital and automated solution for same-day finance to its SME customers.

The partnership with BAWAG is the first time Spotcap will offer its lending platform and proprietary analytics to a bank and marks the launch of its “Lending-as-a-Service” proposition. The partnership began with a focused launch for existing BAWAG P.S.K. customers in Q1 2018, before becoming available to all Austrian SMEs over the course of this year.

Short-term money lending is a capital-intensive business model which tends to mean that if a lender is raising capital, it is usually because its activities are growing in scale thereby requiring additional capital funding to accommodate growing client numbers.

We hope this Spotcap review has helped you understand the advantages and disadvantages of the company and can help you decide whether to take a small business line of credit  with SpotCap. For any inaccuracies or more information you’d like to know please contact us.

Submit an Expedited Application to Spotcap Through Become